I am so lucky

By sheer dumb luck (?) I didn’t get disassociation; Gawd knows, I’d never have come back. Likewise clinical depression, I avoided it too.

I think if I’d been physically or sexually abused one or both of those would certainly have been my reality.

The journey I took was hard enough because of a variety of factors: the biggest one being that no one seemed to think (including my early shrinks) that there was anything really wrong with me I couldn’t just change. Little girls didn’t get PTSD in the 1950s. I was white, upperclass, etc. What problems could I have? Well, yes I didn’t have a mother, but I had caretakers, dorm mothers, camp counselors, doctors (and more doctors), shrinks . . . .  what was my problem?

The description I’ve got in the memoir is that it was like I was a balloon, with a large rip underneath, which no one else saw. They all expected me to soar! I had all these things going for me: beautiful home, enough $, educated family, etc. etc. etc. But I couldn’t, no matter how hard I tried  —  they didn’t get it. No one did. And that just layered atop the Abuser’s narrative: there was something wrong with me, at my DNA or such. And for whatever reason, for 42 years before diagnosis, I just kept trying to prove her wrong. I kept trying to get my family to tell me they approved of me. I kept trying. I’d win once in a while, but I’d lose more often. Then I’d despair. I became increasingly more bitter and cynical.

Then this 6’1″ miracle happened to me. And things started to change because I believed one person didn’t think I was horrible. I called him my “shield against the world” for most of the first 10 years we were married. Whenever he was out of town, my anxiety went back up to the old levels  — I was back in the hell I’d lived in before: the hostile universe, the world where people would take anything and everything they could from me, because it was me.

It took a long time and a lot of work on his part before I really got that people didn’t see some devil mark on me, that said they should be nasty or whatever. That many people in the world would like me, if I gave them 1/2 a chance. That I wasn’t sub-human, stupid, ugly, and inherently unlovable.  I was starting down that path when my hormones went ape for the 2nd time and I had my midlife crisis, over 20 years ago now.

And got a hugely lucky break. The marriage counseling we got was from a woman who knew about PTSD.

She diagnosed and helped me learn how to  deal with it. We learned to deal with the things we hadn’t been able to and I kept seeing her, over 12 years by the time she retired.

Somewhere around 55, I stopped hurting. That was so phenomenal! The really odd thing for me was that no one noticed! I wanted a parade, a statue put up, something !!! It had been my goal as long as I could remember: “Don’t hurt.”

I still carry the pain, but these days it’s not ever-present, it’s associated with my past. And, yes, I still chose every day to deal or cope with it, or not. But because it’s no longer associated with HERE and NOW I can make that decision nearly automatically to NOT deal with it, not have it be part of my narrative today. I finally have a life which is not wrapped around hiding the pain, excusing the pain, explaining the pain, showing the pain or denying its existence.

It’s there, and most days I don’t have to deal with it any more; most days. Of course, this is PTSD, which means that at any moment, life could just pick me up and throw me into the fun house and away we go. The Hallmark movie not too long ago was one. A bigger one was the knitting. Both completely unexpected — SURPRISE!!!!

I still say I’ve been incredibly lucky. And that’s a good thing. I’m sure I would have otherwise not attempted suicide; I would have killed myself.

Without my husband, without diagnosis, without the work from all of us: myself, husband and therapist, I would still be living in that fun house, that hostile and pain-filled universe. It was unbearable at 16, when I first attempted suicide, because as I said at the time, “I can’t imagine living this way until I’m 40.”

It was hard. It was awful. And I’d love to find out if life has something else I can do? We’ll see. My luck may have been all been used up, getting here — or maybe not?

(The image below AND the quote (obviously) are not mine!)

P.S. I don’t agree with the quote actually, but it fit the post nicely! (I’m enough of a writer/editor to find that irresistible.)

P.S.2: The more I think about it, the less I agree with the quote. It was good luck that I was born white, privileged and into an educated family. Had nothing to do with my work or willingness to work. Although if I hadn’t done the mental health work, yes, I would still be where I was. Change takes work AND luck, but luck (or lack of it) starts with things out of your control: skin color, relative amount of available money for education, educational levels of people around you, area of residence, etc. None of that has anything to do with a child’s work when it is born.

Walter Mosley, the author, was a McDowell scholar one year. He came in the bookstore. He is an educated, articlulate man, who was born and raised in Watts. We were the antithesis of each other, as I was raised in a white, well-to-do enclave in Los Angeles in the same period. My mental illness and such caused me to not make use of many advantages I was born into. His hard work and abilities caused him to become the celebrated man he is.  Which of us is lucky? Him for being able to become the person he was or me for becoming the person I have?

Without the money, etc. I had behind me, I could not have focused on my mental health. I would have had to focus on making money to eat and put a roof over my head. In that way, I was really, really lucky. And, again, I had nothing to do with it. 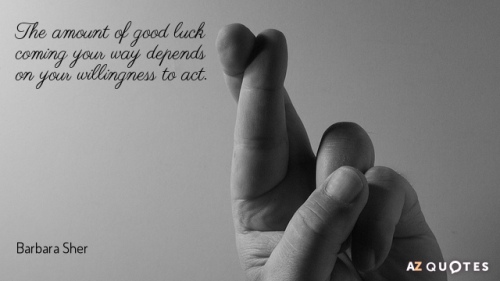 I find the “just work harder” notion promoted by many really bizarre. If you are working 3 jobs just to feed yourself and your kids getting a PhD or even an AA isn’t an exercise in hard work, but a magical ability to make 24 hours into more.

Equally, the “save 1/2 of your food bill” idea only works if you can do things like buy 5 lbs of flour instead of 1 or buy a pot roast to cut up, or go to multiple stores to buy things on sale, or . . . when you are truly on the edge of or just over a survival level that is not realistic.

It’s easy to forget that.

And that’s my problem with the quote above. It presumes that you have the resources to act on your behalf, not that you are doing everything you can to simply survive.

I had a second skein of the yarn I used to make the muffler. I’ve been using the muffler, but it’s a bit narrow. I started playing with that second skein and had a slightly bigger pair of needles and wondered how that would change it? Well, after a few days of knitting, I have the following to report:

I intend to use this one rather than the other. It’s better made and slightly more practical. I may (or may not) rip the other one apart and make a pillow cover from it. I haven’t decided.

No shaking, cold, etc. until this morning when I was casting off. Of course, I kept myself distracted while I was knitting. This time I’ve been watching episodes of the original Ironside on youtube. Whatever the trauma related to knitting is/was, it definitely is its worst during casting off!

The frustrating part is that without an actual memory of what occurred, I can’t do more than I have to combat it. For me to “erase” a trauma, I need to know/understand wtf happened so I can rewrite the scenario, filtered by my adult understanding. It’s the same process I talked about with cleaning the house, here . The “easy” traumas, the obvious and clearly remembered ones, have been dealt with as much as I can. Otherwise, it’s shadow boxing, you guess and try — lather, rinse, repeat — hoping to narrow down what the issue is/was.

The second lapful of warm is a deliberate repetition and a better variation, if I say so myself. Happy holidays to me!

Happy holidays to all of you too, whatever midwinter festival, holiday, or break you practice.