I have been reading a book I’ve had for some time, and only used before as a reference: Home Comforts by Cheryl Mendelson. She has this to say, which I found really mind-boggling:

“The sense of being at home is important to everyone’s well-being. If you do not get enough of it, your happiness, resilience, energy, humor, and courage will decrease. It is a complex thing, an amalgam. In part, it is a sense of having special rights, dignities, and entitlements — and these are legal realities, not just emotional states. It includes familiarity, warmth, affection, and a conviction of security. Being at home feels safe: you have a sense of relief whenever you come in and close the door behind you, reduced fear of social and emotional dangers as well as physical ones.” (page 7)

As an abused and neglected child, I had none of those things. Home was, as I have said elsewhere, the place where they knew how to put the (emotional) knife so it hurt the most. And, if a person wasn’t actively hurting me, they were wondering wtf my problem was? So, I have no expectation of safety at home.

I also have no experience of someone as she talks about caretaking a home as a way of showing love.

DH’s circumstances were different from mine, but his childhood home wasn’t happy and protective entirely either.

I have been for years trying to figure out what makes a place “home” and the most I could come up with was cozy and safe, so that’s what I’ve been heading towards decorating wise. But it has been an ongoing problem for me, because I want something I have never had, and decorating magazines and books just do NOT talk about how to create a home-like atmosphere.

And then there’s this:

“…what a traditional woman did that made her home warm and alive was not dusting and laundry. Someone can be hired to do those things (to some extent anyway). Her real secret was that she identified herself with her home.” (page 9)

And that I’ve never done.

The panic attacks happen in at least one predictable way, or used to. That was if I set up something to please myself. I was sure others would see what I did as laughable, stupid, or just wrong.

Standing in front of a bookshelf with palms sweating and near tears, because I displayed some of my favorite things isn’t an experience I remember fondly, but it used to be common.

I identified myself not with the space I occupied, but internally. Inside was my only safe harbor.

I feel rather at sea in some ways. Years ago, my therapist told me to nurture the wounded kid inside me. I asked, “How?”

She looked at me and said, “If you’d had a kid, you would have learned, because your instincts and the child’s needs would have taught you. But you never had a kid. And you weren’t nurtured. I’ll have to think about that.”

And we came up with some answers, but not a lot. Although I don’t see myself as an uncaring person, frankly, I suck at relationships.

I ruin friendships, put off people, and always have. Some of it was being wounded, because I said inappropriate things, but much of it was just that I never learned how to build community, closeness, not really. I try hard. I try to have integrity. I try to be of use to the people I know, but I’ve never been sure I do it right, and think I screw it up, all the time.

The house is much the same sort of thing. It used to be that every time I did some new decorating thing or worked on cleaning the house, what I said to my husband was, “Are you mad at me?”

And although that’s pretty pathetic, it’s still the truth. These days, by contrast, what happens is that I’m grumpy. I was this morning, when I cleaned the kitchen.

You know? I’d really, really love to outgrow my childhood. Maybe by the time I’m 70?

Who is Aunt Sophronia?

The book is one of the older “housewifery” books I own. In many ways, it’s amusing, but in others, it addresses things which might be so, but its perspective I don’t share. There are various and sundry points which it makes me ponder.

First of all, she is addressing a white, WASP audience, which is talked about as the only right way to live. I guess if you’re a person of color or other belief system, well, you were beyond reproach. In any case, the book was not written for a multicultural, multiethnic audience.

Secondly, this is from the era when they believed that airing was important. It is, but not the way it’s talked about. However, it was the science available to them at the time.

Third, it is also an era where WASP folk of any substance had servants.

With all that in mind, here is a quote:

“Practice economy as a Fine Art: make a duty and pleasure of it: it is the mortar where in you lay up  the walls of home; if it is lacking, or is poor in quality, the home building will crumble. Don’t be ashamed of economy: study it; consult about it; don’t confound it with meanness: economy is the nurse of liberality. Meanness is going into debt for luxury: is keeping behind-hand the wages our work-people have earned: is making a show on the street and withholding charity: is presenting cake & confections to our callers, and stinting the kind or quality of our servants’ food.”(p. 65)

Almost everything we own/do would be considered a luxury by the standard of the late 19th century I think. The statement “meanness is going into debt for luxury” seems appropriate. It’s normal now to live beyond our means, but how could we live differently in this culture? Have we been sold a bill of goods? Is keeping up with the Joneses, imaginary or not, the marketing tool of mass merchandising? 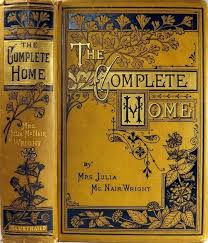 Have I been a sucker my entire life? Maybe.

Without the ‘net, a car, etc. you’re pretty much going to be in poverty, wouldn’t you? Yes, there are ways around some of this: libraries and public transportation.

Frugality these days means paying off your house early or having no credit card debt. If, as the book suggests elsewhere, our job is to pass a home (without debt) and some money to the next generation, how would we live differently?

I have no children, so my next generation is my husband’s nieces. My brother’s child has two working parents and is an adult, married woman, not needing (or wanting) anything from us. So — what would I change and should I?

I’m not sure, but it is an interesting thought experiment.

teacupofwater
Create a free website or blog at WordPress.com.